Home » Prepping » You are reading »

Our Road-trip 2012 was not without a few speed bumps.

I had a plan. A bit strict, but there was lots to see and I didn’t want to miss any of it! Becuase we were using The Principal’s hotel points we had to make reservations for each night. That meant we had to be at that hotel for that given night. That made for a bit of stress. Just because Mapquest says it’s a 5 hour drive from Point A to Point B doesn’t mean it will only take 5 hours. The first weekend was my family reunion at Cass Lake, MN. From there we went to Minneapolis. Had to stop to see Paul Bunyan! Me and cousin-in-law Stephanie. She texted me ev.er.y.sing.le day for over a month after mom passed away. I hadn’t met her until the reunion.

Sunday~We stayed in downtown Minneapolis. Was great fun for this country family. Monday ~We went to St Paul to tour the Capital building. We also looked around the Cathedral of St Paul. AMAZING! We also made a quick trip into WI. to grab a Geocache then to the Mall of America ….of course I had to deliver a little sumfin’ to Anna from Cassie. Which meant a photo op with Sam!! Oh my cuteness!! Tuesday ~We drove on Rapid City via Badlands Highway. It was 103 degrees this day! (this was where I hit my first wall of exhaustion…too many hours in the car and too much stress trying to stay on schedule) From Rapid City we headed to Mt. Rushmore. This was my 3rd visit….The Principal’s first. It was special to see it through his eyes! We hiked the Presidential Trail where we got up close to the presidents. We also got to see that The Principal’s company was the manufacturer of the air compressors used on the mountain. Very cool to have The Principal explain how they work. Wednesday~After Mt Rushmore we headed to Deadwood. This was something we were all looking forward to after driving through it on Road-trip 2010. Ended up being a real disappointment. Mostly casino’s. We did get to see Mount Moriah cemetery where Wild Bill Hickok is buried. Thursday~We drove on to Cody, WY via a scenic route where I got to see my friend Suzanne. They were also on vacation going to where we had been. I would link to her, but she doesn’t blog 🙁 Cody was amazing! We would totally go there again. Buffalo Bill Historic Center was a highlight. As was the Cody Dug Up Gun Museum and the Cody Gun Fight. Friday~ Ah Friday….the day we were to drive to Jackson Hole, WY via Yellowstone.(where it was raining after 103 degrees a couple of days prior) We called to confirm our Best Western reservation. We were using a voucher they had sent The Principal for thanking him for the many nights he had stayed with them. Well. To use this voucher for a free night we had to call to make the reservation instead of just making it online. They couldn’t find it. Then they did. It was made for July 31st not August 31. Attached to this reservation was our Friday night in Livingston, MT. Since we were ‘no show’ for both of these, since they were made for July, not August, we were charged $350 to our credit card and lost our points for Livingston. We were out of points and the Jackson Hole hotel wouldn’t honor our voucher at all. Our trip to the Tetons was cancelled. No apology from Best Western…They said the voucher was still good so we got a room in West Yellowstone. We get there, check in, unload. About to go to dinner and we get a call from the front desk ….the voucher has been redeemed. Jackson Hole hadn’t charged our card, they redeemed the voucher. So now we are in a room that is $189! A MOTEL room that is $189…not the Ritz Carlton. After close to 45 minutes on the phone with upper management at Best Western she did re-issue the voucher, that we were told was still good o begin with. She credited us half of the lost points. This whole fiasco put a HUGE damper on our vacation. We were really looking forward to Jackson Hole. Not getting an “I’m sorry, it was our mistake” from Best Western didn’t help.

Saturday~ We cut our trip a day short and went home. Of course this was after my breakdown over finding a decent coffee :/ and leaving my wallet in the bathroom in Missoula. Cracker Barrel was totally going to MAIL it to me! But my friend Suzanne came to my rescue and grabbed it on her way home!

What did I learn? I learned 12 days (scheduled) is too long. I learned that we would rather not load and unload the car every morning and night for hotels, no matter how nice they are. I learned we are a much happier family if we wing it…just like we unschool…outside of the box. I am glad I did research a few stops like those in Cody. But I know we missed a lot because we needed to make our reservation. Next vacation? A week in Yellowstone? Maybe head to Utah to Arches?

Share this…
https://mamakautz.com/road-trip-2012-wrap-up-or-national-lampoon-goes-west/2015-06-05T14:04:58-07:00Mama KautzPreppingRoad trip,vacation; Our Road-trip 2012 was not without a few speed bumps. I had a plan. A bit strict, but there was lots to see and I didn't want to miss any of it! Becuase we were using The Principal's hotel points we had to make reservations for each night. That meant...Mama Kautz mamakautz@gmail.comAdministratorMama Kautz - The Essential Prepper 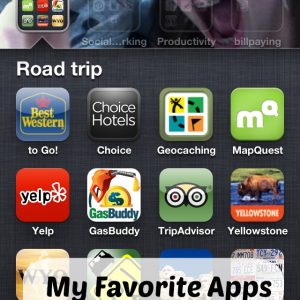 Must Have Apps for Road-trips

{Unplugging} from Social Media & A Road-trip